With the addition of Marko to our security detail, the potential for puppies has increased.  While there have been no witnessed ties, anything is possible.  Raina tends to have a spring/autumn cycle but we are keeping an eye on her just in case.  As of 12/12/2019, there have been no noticeable physical changes and we do not believe puppies are in our immediate future.  *EDIT* – on 12/15/19 we had Raina checked via ultrasound for pregnancy and she is not bred.

Raising LG dogs will be a new adventure for us.  We are looking forward the experience while trying to cram a whole lotta book learning in between our ears in the mean time.

Some important things for me to mention, I failed as a trainer during Raina’s early years.  She did not settle in to being a guardian until this year (2019) at four years old.  I subscribed to the “put them with the livestock and don’t interact much” method of raising dogs for her first two years and sincerely regret it.  Once I took the time to bond with her as a team mate, things really started changing.  Just before her fourth birthday, she started showing the signs of a maturing guardian.  Then, we added Marko and they now make a beautiful team to behold.

I plan to add short tidbits of things that I did wrong and what I learned from the process.  Immediately, I will note that having a single dog was not good.  A second dog gave Raina a buddy as well as a partner.  Poor Marko, he gets the brunt of her attention and she doesn’t hold back with him.  She’s kinda brutal.  He has to repeatedly tell her not to pull his tail. 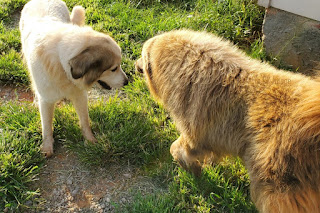